Upcycling a Cereal Box into a Magazine Holder 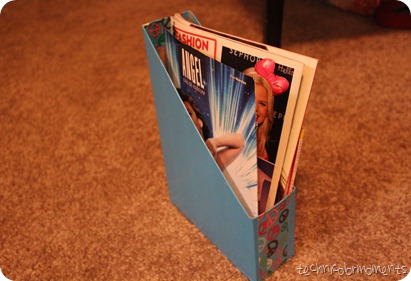 For day two of Blogruary, I have a craft project! Recently, Karen Kavett made a video about how she reorganized her craft supplies and made magazine holders from corrugated cardboard, and she made a comment about how she had originally used cereal boxes, but they weren’t pretty or sturdy.

Well, she ended up covering the cardboard with duct tape anyway, and I thought that adding the duct tape to the cereal boxes would add enough stability for me, so I went ahead and gave it a shot.

To see how I did it, keep reading. 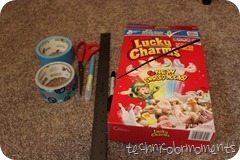 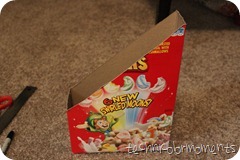 Start by marking a line on the two narrow sides, one nearish to the top, and the other about 3-4 inches from the bottom, then connect them with a diagonal line on the front and back. Then, cut along the lines. I used an Exacto Knife, scissors will also work.

Then, I simply covered it with duct tape. I did the narrow sides first in a printed tape, then the sides in a solid, overlapping on the front and back just a little bit.

The bottom, I ended up covering with a stripe of the printed tape, but the inside I left like this. I mean, it’ll be full of magazines anyway, so who cares, right?

And here it is on the shelf finished, along side of the two I made using Karen’s method. Her style is definitely more stable, but mine is good enough if you have the boxes on hand and aren’t overly concerned about needing them to be heavy. Also, a peek of where they sit on my crafting shelves, which I plan to show later this month- when the light in here is a bit better. 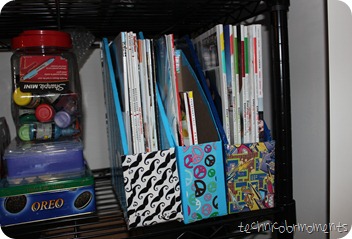 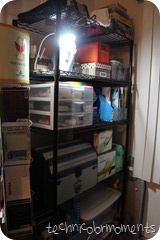 To see how Karen did hers, you can see the blog post here, or watch the video below. In which Karen Kavett is everything I wish I was.

Just as an aside, the box I used was a bit small for most magazines. Keep in mind you may need a pretty large box for some magazines. This will mostly be holding my Readers Digests that my grandmother gifted me.