Have  I mentioned that I absolutely love making playlists? I usually make a playlist at least every month or so, and often I don’t do anything with them except listen to them on repeat in my car. I decided that I wanted to start doing a new monthly feature: Playlist of the Month.

I’ll put together a playlist- sometimes themed, sometimes not, and share it with you guys. Plus, I’ll go through and talk about each song and how they fit together. My music taste is pretty random, and, in all honesty, not very good. Don’t expect highbrow music from me. But regardless, here is the February 2013 playlist: 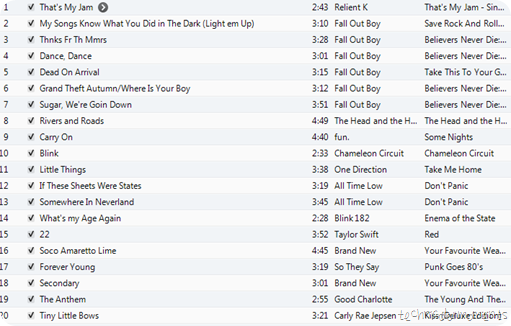 First, That’s My Jam by Relient K is a new song about the mid- to late- 90s. Band names & lyrics from that time are most of the lyrics of the song, and it’s just the catchiest thing ever. This is the new Call Me Maybe.

After that, I have the new Fall Out Boy song, My Songs Know What You Did in The Dark because, HELLO, NEW FALL OUT BOY. It’s so good, and so catchy and I am so happy Fall Out Boy is off hiatus. Then, I have a series of some of FOB’s biggest hits, just because I am so excited for them. None of these are particularly obscure songs, but just some of the top best of the best.

Next, comes two songs, Rivers and Roads and Carry On, which are songs that I’ve learned to play on the ukulele, and only recently go into because of that. These are probably two of the most tuned down songs on the playlist, so I put them towards the middle to be a nice break in the more upbeat music.

Those are followed by a couple of songs without a theme or anything: Blink, by Chameleon Circuit, which is a Time Lord Rock band (aka, a song about Doctor Who.), and Little Things by One Direction, both just very nicely done songs. After that, two All Time Low songs, because they are the master of catchy songs.

Then, a series of songs about ages- What’s My Age Again (“…nobody likes you when you’re 23…”), 22, Soco Ameretto Lime (“we’re gonna stay 18 forever…”), and then a cover of Forever Young. This is the bit that keeps up with the birthday theme. Unfortunately, there aren’t any good songs about turning 24. Someone should write one.

Finally, I wrapped it up with Tiny Little Bows, which is the only good song besides Call Me Maybe on the Carly Rae Jepson album.

What are you currently listening to?