So I went to the movies twice this week. I really like going to the movies- in fact, in high school, I went AT LEAST once a week, but often as many as 3+ times. I saw almost every movie that was in theaters between my sophomore and junior years of high school. The theater near me had $5 movies if you went before 3pm, so I did. Since prices have gone up, my movie viewing has cut back, but this week was like being in high school again. 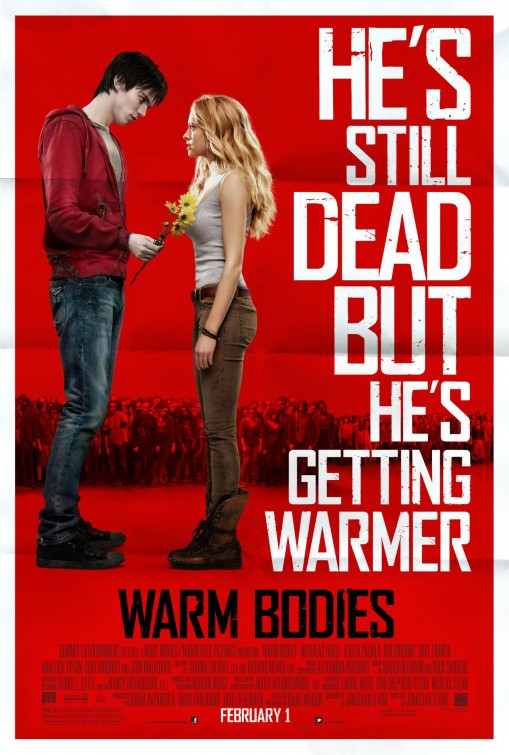 Warm Bodies is about a really unusual zombie, who saves a human from being eaten, and then they become friends. R is nothing like any other zombie I’ve ever seen in any movie or book. For starters, he has a vinyl collection, and he also can talk, sort of. His language skills improve throughout the movie, as the relationship between him and Julia progresses. He also provides the voiceover for the whole movie with an inner monologue that is so unique, and contains such gems as, “Don’t be creepy. Don’t be creepy. Don’t be creepy,” and “Oh god, say something human. *grunts* Nailed it.”

Movie 43 is a movie about a movie, in which a writer is pitching a series of stories to a producer. Despite his claims that they are all wholesome and family friendly, they are “raunchy,” “outrageous", and “funny.”

I’ll give you a second to guess which one was good and which was a total waste of time and money. Go on, guess.

If you said that Warm Bodies was the best movie ever, and Movie 43 made me actually wish for a zombie apocalypse to take place, you would be 100% correct.

You guys. Warm Bodies was SO GOOD. It was so unrealistic, and at times so silly, but it was also so heartwarming, and sweet. I know it’s a book which I haven’t actually read yet but I will be buying in the near future- hopefully tomorrow. The best thing about this movie, without fail was R’s inner monologue. He narrates his own life with the best kind of self deprecating humor, and jokes about being a zombie. Also *here be spoilers* I really enjoyed the message of ~love conquering all~ and all of that. Go see this movie.

Similarly, you guys. Movie 43 was SO BAD. There was nothing about this that was funny in any way, and it went beyond raunchy and outrageous into the world of painful and cringe inducing. I can’t name one single thing about this movie that I enjoyed. I didn’t think I would necessarily enjoy this movie, but I didn’t expect to vehemently hate it. If this movie is airing on late night cable and you can’t sleep because you slept all day,and then had a gallon of Mountain Dew, and you only get that ONE channel… read a book. Not even then, would I suggest you read this book.

And that’s all I can say about those. I don’t really know how movie reviews are supposed to work. Did I do this right?

What was the last movie you saw? Did you see either of these two? What did you think?