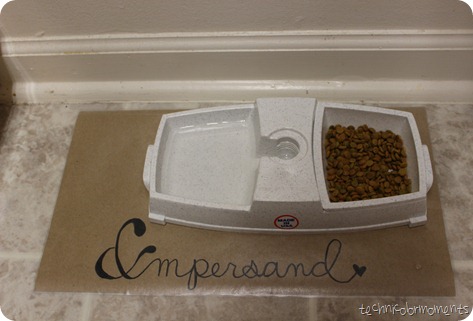 As I’m sure you are all quite aware at this point, I am a little bit obsessed with my cat, Ampersand. The thing is, though, is that despite that love, I’m still pretty cheap- er, frugal. So, I had been using a bit of cardboard left from some other project as a tray to keep her food dish on. It’s been quite a few weeks now, and that bit of cardboard was getting kind of gross. 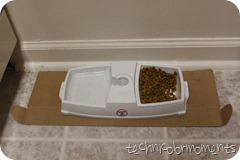 I wanted to invest in one of those fancy placemat type things from the pet store, but I have a hard time spending $10+ on something that my cat will probably make a mess all over, so I decided to come up with something using what I had at hand. 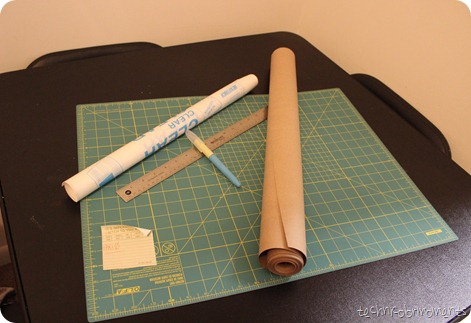 All I used for this project was the brown butcher paper I’ve been using for anything and everything lately & clear contact paper. I also used a cutting mat, Exacto knife, ruler, and some not-pictured markers. 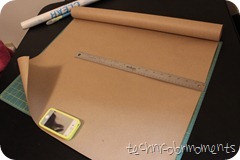 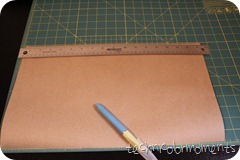 I cut out some brown paper to be 10”x17”, which was actually a pretty arbitrary measurement based on just lying my ruler near the food dish and guessing what would be a good size. You should probably actually measure the space that you intend to keep the placemat in, or something.

As an aside, YOU GUYS, a cutting mat and an Exacto knife make everything so much easier. Why do scissors even exist? 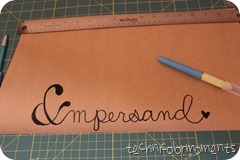 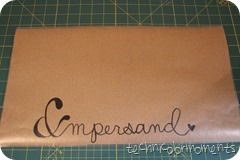 Then, I did a little doodle of an ampersand, along with her name onto the paper. (I actually really want to make that into a stencil, along with a few others, like interrobang, exclamation & question using the symbol as the first letter, for my etsy. I just haven’t gotten there yet.) Finally, I covered both sides with clear contact paper, so I can easily wipe it clean and it’s waterproof and catproof and messproof. 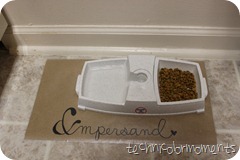 I think it actually came out pretty cute, and it’s definitely useful! Do you spend a lot of money on your pets? Also, feel free to show me your pets in the comments :D