Today was, hands down, one of the best days I’ve had since I moved to Charleston. In case you don’t know, Jenn likes books. And when it comes to books, Jenn likes her books of the Young Adult variety. So, today was YallFest, the Charleston Young Adult Book Festival, and holy crap, y’all, I was living the dream. 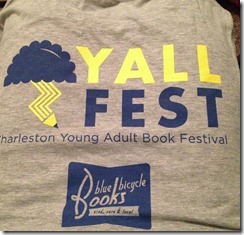 YallFest was put on by the great people at Blue Bicycle Books, a used, rare and local bookstore in Charleston. If you’re local, you should definitely check them out. They have tons of awesome books, and the staff is super helpful and friendly, too. Plus, hello, they put on YALLFEST! 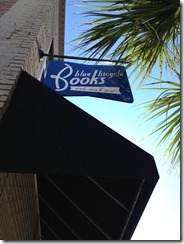 So anyway, this year was the second Fest, but my first, and I signed up to volunteer. My job was to stand at the front of the signing tent, and keep these whiteboards up to date with who was signing when and where. Basically, I talked to pretty much every single person who walked by, answering questions and pointing out directions. I had a blast meeting people, including some nerdfighters! As you can see there were some huge name authors there, and my second job was to keep track of Cassandra Clare’s signing number- she had such a huge draw, tickets were given out ahead of time and she did nothing but sign and sign and sign all day- so I kept note of that, and also tweeted it out throughout the day. (Hi new followers!) 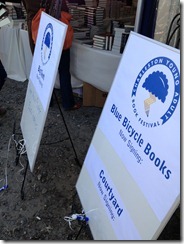 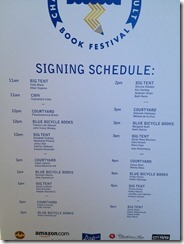 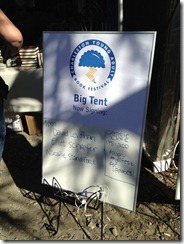 Oh, did I mention this? LOOK AT ALL THESE BOOKS, YOU GUYS. Books from all 40+ authors were for sale in this huge tent all day, and I got to stand there and drool all over them. Good thing I left my credit card at home, right? 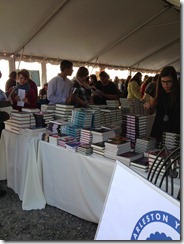 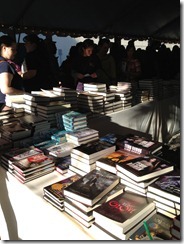 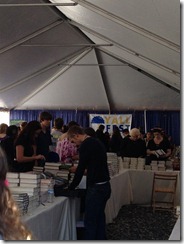 There were some looong lines, YA fans are serious about their authors. It was amazing to see so many readers so happy to get the chance to meet and talk to their favorite authors. I heard so many people freaking out about how ecstatic they were today. The best thing though, especially for an admittedly “older” YA fan, was to see the insane age range of YA readers. I saw groups of kids probably in upper middle school, through people old enough to be my own parents, and everyone in between. I saw couples exchanging stacks of books as they switched off between lines, I saw mothers and daughters comparing their signed copies, and just so many people of so many different ages SO EXCITED about young adult literature.

I know that in my own experience I’ve gotten quite a bit of flack for being such a big YA fan, that I should read real literature, etc, but this crowd made me so happy to love what I truly do love. YA fans are the best people, in my opinion, and I was definitely proved right today. 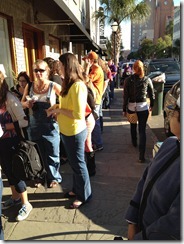 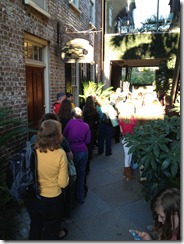 At the end of the day, after all of the panels and signings were done, there was one last stop to be made. The Charleston Music Hall was home to the YA SMACKDOWN, a “Whose Line is it Anyway” type event, where the authors were broken up into teams based on their genre: Paranormal, Romance, Contemporary, Mystery and Dystopian. Then, they competed against each other to improvise storylines. Basically, this was the funniest thing I’ve ever seen. If you ever get to go to one of these events, please do.

Smackdown wasn’t recorded, unfortunately, but a few of the panels were, and are available to view here.

For the last part of this, I’m going to talk about meeting two of my favorite authors. I won’t be sad if you leave now. 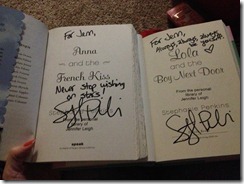 Stephanie Perkins, author of Anna and the French Kiss & Lola and the Boy Next Door has to be the most genuinely sweet and considerate person I’ve ever met. She’s the only person I witnessed all day stopping to sign for people when she was on her own time (although part of that may be that she’s one of the most easily identifiable authors I saw today, with that amazing hair). I gave her one of my hair bows, and she thanked me and told me how much she loved it so many times, it made me so happy to see how genuinely pleased she was. I hope that I get to meet Steph again in the future, and not only because I’m going to need to have Isla signed to get the full set when it comes out.

Oh, and we talked about Etienne & Cricket. According to Steph, she'd have a crush on Etienne but be totally intimated by him, and she'd be friends with Cricket, but Isla's boy is the one she'd date.

As an aside, Stephanie’s husband, Jarrod, is also a pretty awesome dude. He went out of his way to ensure I’d get a chance to meet his wife when I wasn’t sure I’d be able to leave my volunteer post. I also witnessed him helping Stephanie out when she was signing some books, with opening them and getting to the right page and stuff. Plus, he’s a nerdfighter. I was happy I got a chance to spend some time talking to him too. 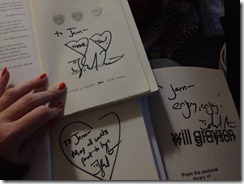 David Levithan, is the author of too many books to name (John Corey Whaley, while imitating him during smackdown claimed Levithan writes “a million books a year), but pictured above are will grayson, will grayson, Boy Meets Boy & The Lover’s Dictionary. If I had to name my number one favorite YA author, it would be David Levithan. Meeting him was a dream come true for me, as I’ve been a fan since 11th grade- well over 6 years now. I can only think of one or two authors (coughjkrowlingcough) who would leave me more shaky than this encounter did. But he, again, was very kind and listened to all of my insane rambling as I told him what a huge fan I was. Meeting him was my reason for coming to YallFest, and just everything I could have hoped it would be.

YallFest will be taking place again next year, on November 9th, 2013, so if you’re in the area, you NEED to check this one out. If you aren’t in the area, I’d love to not go alone next time, and I totes have a couch to spare.