Hello! For those of you who know me or who watch my videos, you already know that I really love wearing bows and things like that in my hair, and I often pin the front of my hair back, and then cover the pins with a bow.

Well, lately, I’ve been finding that I’ve been lazy. I can’t be bothered to dig through my bows to find one that matches, or I honestly just forget. But, I still like wearing my hair pinned back, so I decided maybe I should just fancy up some of the hundreds of bobby pins that inevitably end up filling my dresser and bathroom.

All of these were pretty much done by going through my house and seeing what I could hot glue to a bobby pin- turns out, a lot. Here are just a few of what I’ve come up with.

This first one was just a shape cut out from a paint chip. You could use any sort of heavier paper or poster board, and do a whole variety of shapes and colors for these. Basically, you could make one to match every outfit, in every shape you could ever think of.

After that, I decided I wanted to get a bit closer to my bow roots, so I made a… a bow. I also decided to stick a rhinestone on it to make it a little bit fancier, but it was honestly really cute without it, too. This picture sort of looks like it has an eyeball on it, but I promise it’s just a rhinestone.

Speaking of rhinestones! This one is really cool because it actually looks kind of fancy. For this, all I did was hot glue little rhinestones all the way down the grip instead of just putting one or two at the top like I’d been doing for the other ones. I really like how this one turned out, and I have a feeling it’ll be making an appearance at my cousin’s wedding in the spring, which was definitely not what I was planning.

After that, I had to do something silly, so I pulled out my trusty googly eyes. I partially blame Wil Wheaton and his wife for this, but after the 2012 Project for Awesome, I find myself always pulling out googly eyes when I need to decorate something. I think I’m going to like wearing this one a lot because the eyes peek out of my hair in a wonderfully creepy way and wiggle around when I walk.

Finally, I couldn’t finish this project without using some buttons. Because we all know that Jenn is obsessed with buttons. So I did two with buttons: For the first one I took two differently sized buttons and glued the smaller one into the bigger one and then put them both on a pin. For the second, I took a bunch of smaller buttons that looked good together and just like I did for the rhinestone one, I put them all down the bobby pin.

The buttons are definitely my favorites of the bunch, but I love them all a lot and can’t wait to wear them and show them off.

I have SO many more ideas for these, so while there’s already a video here of these, I will probably be posting a part two in the near future. I want to put legos on some, and maybe some Mod Podged magazine pictures and just- SO MANY OPTIONS.

In fact, let me know in the comments or on twitter (@techni_moments) what you want to stick on to your bobby pins! If you do these, I wanna see them!


PS! Don’t forget how bobby pins are supposed to work! The bumpy grip side should be closer to your head, which is great because you have that flat surface to craft on! 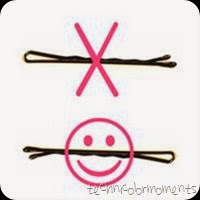 Posted by Technicolor Moments at 8:00 PM