I have been on a sewing BINGE lately. Like, it's literally all I've been doing. First, I made this makeup bag thing: 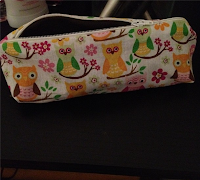 I've sort of started developing this new makeup obsession, and my current collection is now the cosmetic bags deep (two of which I made), and this is the newest style bag I've been working on. It's zippered and flat bottomed and super cute. Also, owls! It's fully lined and all that. If it looks familiar, it's because I had it in my post last week, but decided to delete it there and move it over to this post with more crafts. 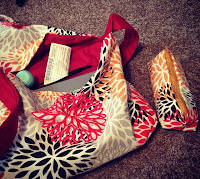 Then, I decided I needed a new purse/every day bag because I've been using the same one for a really long time, and I get bored. So I decided I wanted to go for a messenger bag because I haven't used one in a while and it's one of my favorite bags to make. Honestly, I can churn one out in less than half an hour, so I love doing them. This fabric is amazing- I love the autumn-y colors with the red and gold and grey, and it's a home dec fabric so it has some weight to it. And, I made another one of my flat bottom zippered bags but not for makeup. I have like,hand lotion and advil in it. The bag contains my first ever in-lining pocket, which I'm disgustingly proud of, ha. 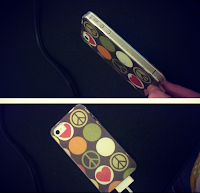 The last new craft isn't sewing, but actually just a cheap tip/great usage for some scrap fabric. So, I have this super cheap clear phone case that I bought at Radio Shack for like 5 bucks, and so far it's actually been holding up decently. I drop my phone a LOT, and it's been all good. But like. It's boring? Anyway, I was sewing up a storm, and found this teensy tiny scrap of one of my favoritest fabrics and had a lightning bolt of inspiration hit me. So I traced my phone and lined it with PACKING TAPE. and ta-da: cuteness.

Finally, I made one more thing and I'd love to share it with you. I've taken all of my sewing projects lately and opened up an Etsy shop. It's right here, and so far it just has a couple of makeup bags and wallets, plus one decently sized tote bag. I'm going to Philly in two weeks and have a TON of fabric there that I'm planning to bring back and make some more stuff out of, and if memory serves I have a whole bunch of great fabrics from when my old JoAnns was closing - including some nice silks and stuff like that- so check back and see if there isn't anything there for you now :)