[Review] Who Done It; Jon Scieszka 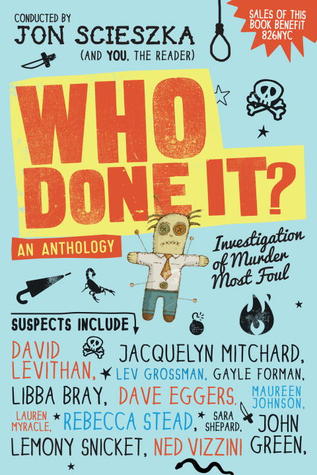 Summary from Goodreads:
Can you imagine the most cantankerous book editor alive? Part Voldemort, part Cruella de Vil (if she were a dude), and worse in appearance and odor than a gluttonous farm pig? A man who makes no secret of his love of cheese or his disdain of unworthy authors? That man is Herman Mildew.

The anthology opens with an invitation to a party, care of this insufferable monster, where more than 80 of the most talented, bestselling and recognizable names in YA and children’s fiction learn that they are suspects in his murder. All must provide alibis in brief first-person entries. The problem is that all of them are liars, all of them are fabulists, and all have something to hide...

What I Thought: I had a really hard time getting my hands on this book, and I really wanted to read it it because there were so many good authors featured in it, so by the time I got a copy my anticipation for it was REALLY high.

Overall, I liked this book, but I didn't love it. I loved some of the individual stories or alibis, and some I really didn't like and thought were quite boring. I liked the unified characterization despite the varying writing styles and I really liked that they were able to maintain that consistency. I also liked this book for finding new authors because I was able to get brief samples from a TON of different authors.

My main problem was that there wasn't really a good conclusion or wrap up, it just sort of ended. I wanted there to be more of a storyline than just a bunch of unconnected stories. I would have loved more interaction between the different alibis as well.

Read this if: you're a YA fan, you want a quick read, or if you like not-really-mysterious mysteries.