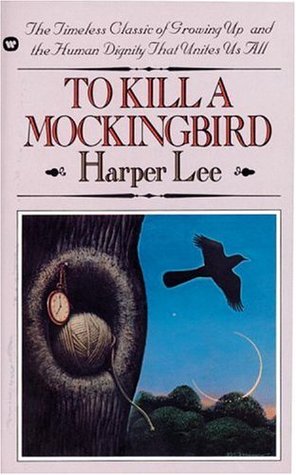 
"You never really understand a person until you consider things from his point of view .. until you climb into his skin and walk around in it."

Tomboy Scout Finch comes of age in a small Alabama town during a crisis in 1935. She admires her father Atticus, how he deals with issues of racism, injustice, intolerance and bigotry, his courage and his love.

What I Thought: This is another one of my Crash Course Literature rereads, and a book that I initially hated. This book is a long-standing favorite of my grandfather's (hi pop!) and a source of tension between us when I refused to read it growing up. Then, when I had to read it in high school, I really didn't like it. That probably has something to do with the way it was taught, but I just didn't. I reread it again for a college course on teaching literature, and designing curriculum for it made me like it a bit more, but I still wasn't a big fan. This might have been the read through that changed my mind.

I definitely have a sense of appreciation for this novel that I didn't have at 15, or even really at 20. I understand a lot better the cultural significance of the story and the politics of it, and I even really appreciate Scout's narrative.

I don't think that I'll ever LOVE To Kill a Mockingbird, but I do like it a lot. Like I said, Scout's narrative is wonderful, Jem's changing and growing feels true to life, and Atticus is such a complex character, bridging the gap between a father and a freethinker in a close-minded town. I don't know if this is a book that should be read in high school, but it's definitely a book that should be read, and I like it more every time I read it.

Read this if: you've read it before and didn't like it, but are older now. Really. That's who should read this.